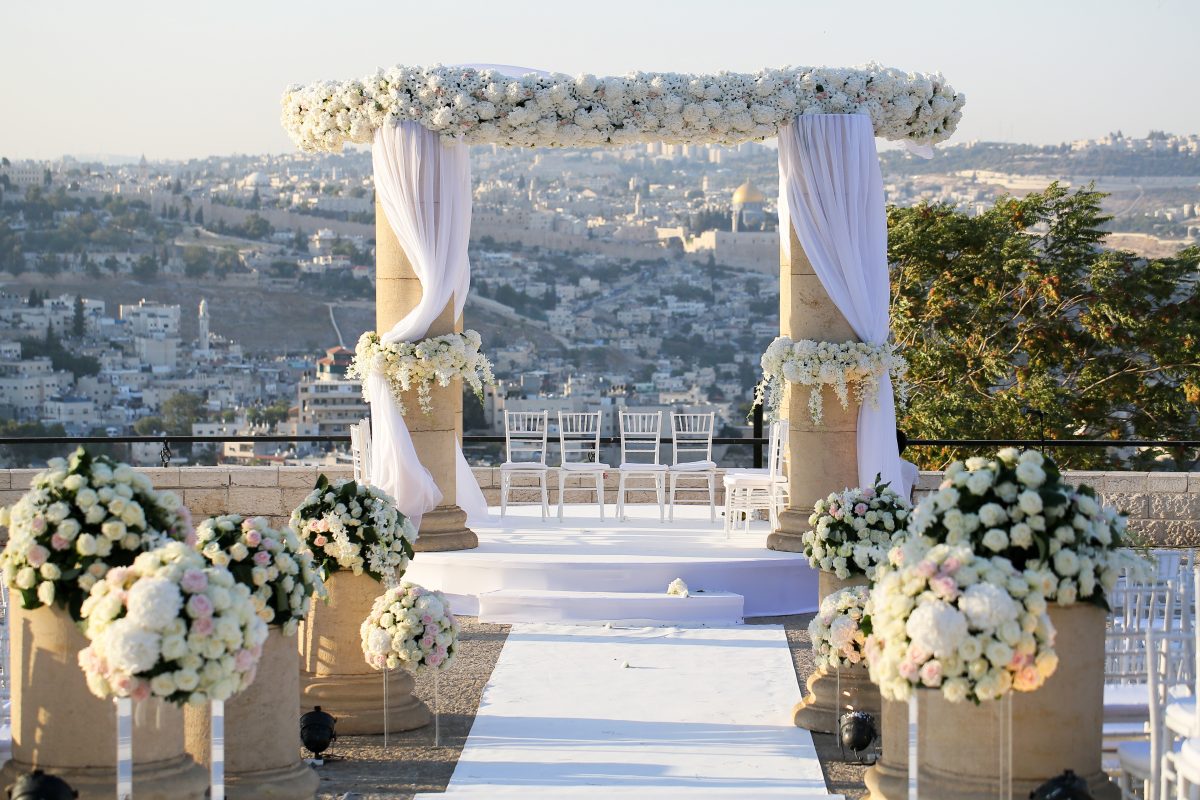 What is the origin of the biblical wedding?  There is so much information on this subject that I will begin with the origins of the wedding and the wedding contract. I will continue this subject for several articles.  The wedding begins in the following scriptures:

Exodus 19:9-19. ADONAI said to Moshe, “See, I am coming to you in a thick cloud, so that the people will be able to hear when I speak with you and also to trust in you forever. “Moshe had told ADONAI what the people had said; 10 so ADONAI said to Moshe, “Go to the people; today and tomorrow separate them for me by having them wash their clothing; 11 and prepare for the third day. For on the third day, ADONAI will come down on Mount Sinai before the eyes of all the people. 12 You are to set limits for the people all around; and say, ‘Be careful not to go up on the mountain or even touch its base; whoever touches the mountain will surely be put to death. 13 No hand is to touch him; for he must be stoned or shot by arrows; neither animal nor human will be allowed to live.’ When the shofar sounds, they may go up on the mountain.” 14 Moshe went down from the mountain to the people and separated the people for God, and they washed their clothing. 15 He said to the people, “Prepare for the third day; don’t approach a woman.” 16 On the morning of the third day, there was thunder, lightning and a thick cloud on the mountain. Then a shofar blast sounded so loudly that all the people in the camp trembled. 17 Moshe brought the people out of the camp to meet God; they stood near the base of the mountain. 18 Mount Sinai was enveloped in smoke, because ADONAI descended onto it in fire -its smoke went up like the smoke from a furnace, and the whole mountain shook violently. 19 As the sound of the shofar grew louder and louder, Moshe spoke; and God answered him with a voice.

The ancient Rabbis teach that God reached out from the heavenlies at Mt. Sinai and kissed the face of Israel under God’s Chuppa (marriage canopy) which is what the thick cloud hovering over Mt. Sinai represented.  The marriage canopy or Chuppa is a canopy under which a Jewish couple stand during their wedding ceremony. It consists of a cloth or sheet, sometimes a tallit, stretched or supported over four poles, or sometimes manually held up by attendants to the ceremony. The Chuppa symbolizes God’s covenants, promises, covering, and the home that the couple will build together. The following chapter, Exodus 20, recounts the giving of the Torah on Mt. Sinai under this heavenly Chuppa. The Torah is the first five book of the Bible and is considered a wedding contract as well as the Word of God!  Let’s Study:

Ketubah is Hebrew for a marriage contract and has been a tradition since Mt. Sinai and the giving of Torah.  The intent of this tradition is powerful and universal.  The word “Ketubah” comes from the root Kaf-Tav-Bet, meaning writing.  The ketubah is the marriage contract between a man and woman.  The ketubah spells out the husband’s obligations to the wife during marriage and is a binding document of confidence, trust, conditions of inheritance, and obligations regarding the support of children.  The “Ketubah” is read aloud before the marriage ceremony just as Moses did with the Torah after Mt. Sinai.

Exodus 24:3 “Moshe came and told the people everything ADONAI had said, including all the rulings. The people answered with one voice: “We will obey every word ADONAI has spoken.””.

The signing of the Ketubah shows that the bride and groom see marriage as more than a physical and emotional joining, but as a legal and moral commitment according to scripture. The same is true with the word of God, the bible!  The Bible is Adonai’s promises of how He will provide and support us, the bride, in truth and the instructions to us concerning how we are to live and remain pure for our betrothed!  How will that promise be fulfilled?  Through the groom, the Son of God, Yeshua!  How does the giving of the word prove this?  Let’s look at the physical construction of the Torah!

A Torah is made up of lamb skins and take approximately 4-5 years to construct.  The Torah is written by a specially trained scribe on approximately 80 sheets of meticulously prepared lamb parchment.  The lamb skin is soaked in lime water to remove hairs and then stretched over a wooden frame to dry.  When dried, the scribe cuts the lamb skin into a rectangle.  The scribe then makes lines for writing on the parchment with a stylus, which makes a mark in the skin similar to running your fingernail across a sheet of paper.  The scribe then prepares (made fresh daily) hand mixed ink by combining powdered gall nuts, copper sulfate crystals, gum arabic, and water. Using a quill pen, the scribe writes one letter at a time on the Torah while singing the letter over and over again out loud until the letter is complete.  This prohibits errors in his Holy Work.  More than 5 errors on one Torah and the entire scroll is thrown away!

When the parchments are complete, they are pierced on the ends and sewn together with lamb sinew called giddin.  Then the completed scroll is sewn onto wooden rollers called Atzei Chaim עצי חיים (Hebrew for “trees of life”).  What an incredible, supernatural God we serve!  The entire universe is orchestrated and created to reflect and honor Yeshua!  The Torah is made from lamb skin, striped, pierced, hanging on the Tree of Life! The Torah is a representation of the groom, Yeshua who is the living word!  The Torah itself is a foreshadow of what was and is to come!  The Torah is the introduction of the Messiah to the world.  God had an arranged marriage and at Mt. Sinai we were given a symbol of the groom, the Lamb, the Son of God, Yeshua! We are His betrothed bride The Torah is God’s Ketubah, the wedding contract and Yeshua is the groom!

Every legal procedure in Jewish life is corroborated by two or more witnesses.  The witnesses testify that all aspects of the marriage are in accordance with biblical understanding.  Two witnesses are called upon to stand under the Chuppah and witness the marriage procedures.  Let’s go back to the original wedding in

Exodus 19:16-18. On the morning of the third day, there was thunder, lightning and a thick cloud on the mountain. Then a shofar blast sounded so loudly that all the people in the camp trembled. 17 Moshe brought the people out of the camp to meet God; they stood near the base of the mountain. 18 Mount Sinai was enveloped in smoke, because ADONAI descended onto it in fire -its smoke went up like the smoke from a furnace, and the whole mountain shook violently.

The entire Nation of Israel was called to be the witness of God’s holy betrothal on Mt. Sinai.  NO OTHER RELIGION HAS BEEN REVEALED BEFORE WITNESSES – HINDU-ISLAM- MORMANS etc… The founders of these religions had an individual encounter, alone by themselves and are false. Adonai works in the open with witnesses: At Mt. Sinai the entire nation of Israel witnessed this momentous wedding occasion.  When Yeshua was crucified all of Jerusalem could see and there were many, many witnesses

In next month’s newsletter we will study the Two Processes of Marriage:  Kiddushin and Nisuin.